Global Plant-based Meat Market by Source (Soy, Wheat, Pea and Others), By Product Type (Burger patty, Sausage, Nugget, Ground Meat and Others), By End-Users (HoReCa and Household/Retail), and By Geography – Opportunities & Forecast, 2019-2026 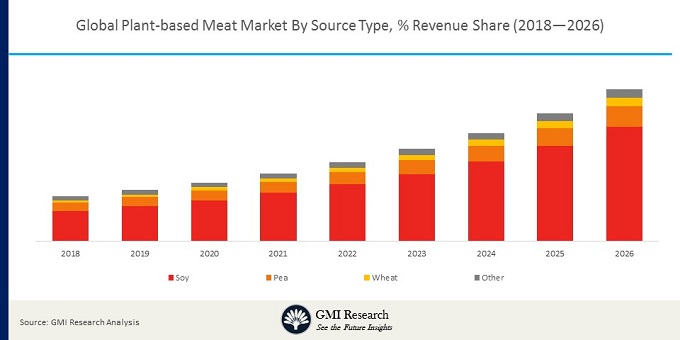 Global livestock industry accounts for 15% of the total global greenhouse gas emissions and this share is expected to rise as meat consumption is on the rise across the globe. The lawmakers in countries such as Germany, Denmark, and Sweden are proposing increase on value-added tax on animal-based meat products. More and more people are moving to Plant-based meat from meat due to concern about health and to protect climate change coupled with solid essential amino acids, vitamins profile and constitutes similar palatable taste and texture. The entry of meat giants such as Tyson Foods and Smithfield in plant-based meat market is bring this market into a mainstream market and this market is started to get attention from major food companies.

Soy segment is expected to dominate the market during the forecast period due to its meaty taste and texture with more fiber along with high production of soybean globally. Also, soy-based meat products contain high protein and low saturated fat makes it a popular raw material choice for plant-based meat.

Burger patty segment captured the largest market share in 2018 because of low calories with cholesterol-free compared to beef. The burger patty is getting traction as more and more fast-food restaurant chains such as Burger King, White Castle, MacDonald’s, Subway and Dunkin’s Donuts are launching plant-based products to target health conscious customers. 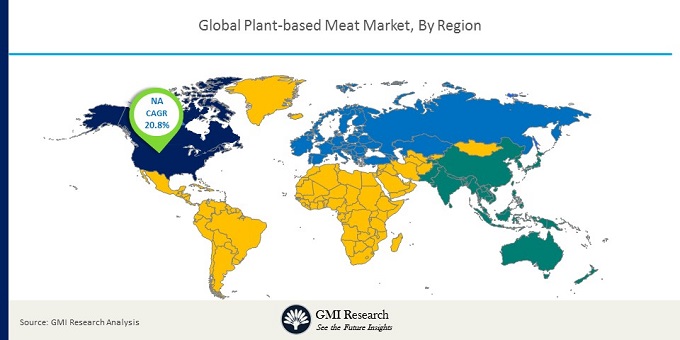 North America region is estimated to grow at the fastest CAGR till 2026 due to an increase in vegetarian and flexitarian population. High obesity & cardiovascular diseases rate across the region, which are linked to higher consumption of processed meat is driving consumers away from meat. The consumers are switching to healthier diets and plant-based products, which taste more like meat and have almost the same protein content will drive the market in the coming years. However, Europe will grow at a healthy rate owing to high health awareness benefits of vegan products among consumers, high availability of plant-based meat products in grocery stores, cultural shift towards organic natural ingredient-based food habits.

Global Plant-based Meat Market by Source (Soy, Wheat, Pea and Others), By Product Type (Burger patty, Sausage, Nugget, Ground Meat and Others), By End-Users (HoReCa and Household/Retail), and By Geography – Opportunities & Forecast, 2019-2026