GMO Corn Market is anticipated to grow at a CAGR of 9.2% during forecast period due to its higher level of hardiness and can be resilient in difficult growing conditions.

GMO corn is a type of genetically modified organism. A GMO is a plant or animal on which genetic modification is performed through the addition of a small quantity of genetic material from other organisms through molecular techniques. Currently, the GMOs on the market today have been given genetic traits to offer protection from pests, tolerance to pesticides, or improve their quality. 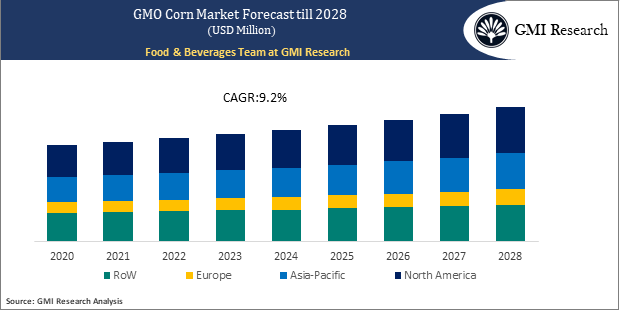 To have an edge over the competition by knowing the market dynamics and current trends of “GMO Corn Market”, request for Sample Report here

The factors fuelling the GMO Corn Market growth includes increasing adoption of advanced bioengineering technologies by farmers, strategic partnership between the leading players in agriculture sector to improve the production and rising sales of GMO Corns via direct channels. According to the report by GMO Answers, nearly 17 million farmers cultivate GM crops, in more than 70 countries, in 2018. Also, farmers in developing markets generated a revenue of USD 4.41 by investing in genetically engineered crop seeds, which is projected to expand the GMO Corn Market size in the approaching years. In addition, the significant increase in the number of stacked trait products and government initiatives such as funding to encourage the education on agriculture biotechnology, and the growing demand for GMO crops to safeguard food security primarily in the China are driving the market growth. For instance, the United States Government allocated USD 7.5 million to sponsor the Agricultural Biotechnology Education and Outreach Initiative, intending to provide education on agricultural biotechnology and food and animal feed ingredients obtained from biotechnology. Moreover, GM crops have been accounted as a feasible source to feed China’s huge population, while minimizing the country’s reliance onleading agricultural exporters. However, biotoxins present in the GMO Crops will hamper the market growth over the coming years.

Based on the Trait, the Stacked segment is expected to grow at a higher CAGR during the forecast period. The Stacked hybrids, which offer resistance from both weed and insect, provided the highest yield increases. According to the researchers, it is estimated that insects are responsible for a 31.2 percent yield loss and that weeds cut yields by 10.5 percent in corn across the globe. In addition to that, over the past 10–15 years, there has been a notable increase in the number of stacked trait products developed and released due to their unique characteristics.

Based on the Application, the Feed & Residual segment is expected to grow at a higher CAGR during the forecast period. Currently, more than 340 GMP crop events/lines have been approved for feed use. GMO corn has also benefited the livestock sector as they have enhanced yields of a feed ingredient, have improved quality traits, and are safer for livestock. Furthermore, as a source of livestock feed components, the relevant GMO crops include corn, canola, cottonseed, soybean, and potato. These crops are principally used in livestock feed rations either as an energy and/or protein source.

Based on the region, the North-America region is projected to dominate the market during the forecast period. The growth of this region can be attributed due to the cultivation of corn crops in large quantities. Overseas demand for America’s cultivated corn plays an essential role in deciding the planted area and demand for planting seeds. For instance, China approved five GMO crops for import from the U.S. and the same has supported the expansion of GMO corn in this region. Hence, due to such factors, the North-America region is expected to account for the largest GMO corn market share. 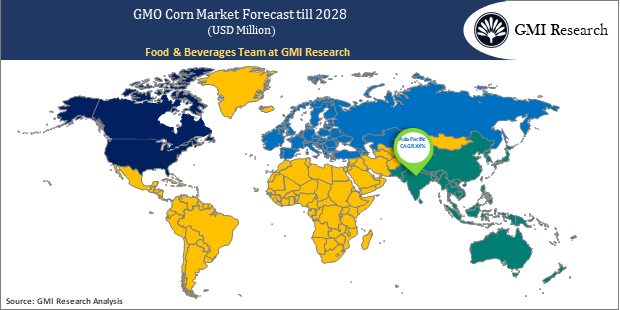 Major Players Operating in the GMO Corn (Option 5: As a part of the Free 25% Customization – Profiles of 5 Additional Companies of your Choice)

What is the growth rate of GMO Corn Market during forecast period?

The growth rate of GMO Corn Market during forecast period is 9.2%.

Which region is projected to dominate the market during the forecast period in GMO Corn Market?

The North America region is projected to dominate the market during the forecast period. The growth of this region can be attributed due to the cultivation of corn crops in large quantities.

What are the significant factor boosting the GMO Corn Market?

The significant factor boosting the GMO Corn market due to Growing uncertainty in global weather conditions continues to hamper the farming produce; hence farmers are forced to adopt new techniques. Corn, which is among the primary source of energy for consumers, are being grown as genetically modified organisms to meet the growing demands.

Who are the leading players in the GMO Corn Market?