Insect Feed Market Analysis Report by Source (Meal Worms, Fly Larvae and Others), By Application (Aquaculture, Poultry, Pig and Others) and By Region

Insect Feed Market is anticipated to grow at a CAGR of 12% during forecast period and estimated to reach USD 1,570 Million by 2027. 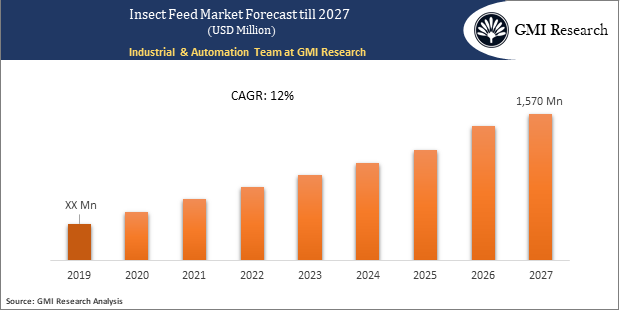 Insect as feed refers to the insect species that are used as animal feed, either for livestock, such as aquaculture, or as pet food. The insect feed offers numerous health benefits such as rich in protein and iron, reduces greenhouse emissions, and other advantages.

To have an edge over the competition by knowing the market dynamics and current trends of “Insect Feed Market”, request for Sample Report here

The growing importance of alternative feeding is one of the major factors that is contributing to the growth of the global insect feed market over the coming years. The edible insects have various ample number of nutritional benefits and deliver higher protein level per weight in a better way. As per the Food and Agriculture Organization (FAO) of the United Nations, the total world’s population is predicted to reach approximately 9 billion by 2050. This will directly increase the demand for food from animal origin, thus surging the demand for protein to feed livestock. Moreover, the insect feed is an addition to the conventional feed, as insects are reared on waste streams and help in bringing livelihood incomes.

The rising population, changing diet patterns, and the strong demand for food products (particularly meat, fish, and eggs) have boosted the requirement for additional suppliers of protein from different sources, including animal feed. As per a study conducted by the Food and Agriculture Organization (FAO) of the United Nation, the total livestock production amounts for 70 percent of the total agricultural land that is in use. The insects are cold-blooded and very efficient at converting the feed into protein. For example, crickets require 12 times less feed than cattle, half as compared to pigs, and four times less than sheep. The increasing awareness related to the various health benefits of insect feed is further opening new doors for market growth. Furthermore, the insect feed has less protein and more fat, which makes them suitable for human consumption.

Restraint in the Insect Feed Market

On the other edge, the stringent rules and regulations related to the launch of new insect feed is one of the biggest factors that is expected to hamper the market growth. For example, the European approach to use insects as feed is greatly affected by the introduction of Bovine Spongiform Encephalopathy (BSE), which has a serious threat to consumer health.

Based on the application, the poultry segment is predicted to dominate the market over the forecast period. The poultry sector is expanding at a significant rate, particularly in emerging countries. Crickets, cockroaches, stink bugs, scale insects, flies, and ants, act as a complementary food source in the industry. On the other hand, the aquaculture segment is expected to grow at a higher CAGR during the forecast period. Livestock and fish act as an important source of protein for people in various countries. The strong demand for farmed fish at the global level is one of the biggest factor that is responsible for the segment growth.

Based on the region, North America region is expected to dominate the global insect feed market over the coming years. The continuous expansion of the Hawaii insects producing companies within the region is a key driver that is driving the growth of the region. Moreover, the rising production of Hawaii insects, followed by the increasing utilization of Hawaii insects for the production of insect feed, are some other factors that are supporting the market growth. For example, in 2016, the usage of HI Larvae in Canada was authorized for chicken feed and it was extended to aquaculture in 2017 and to poultry in 2018. 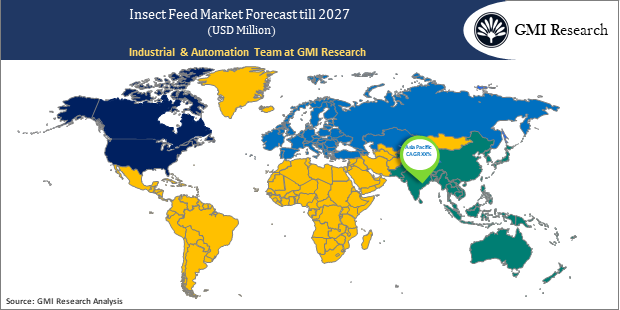 Major Players Operating in the Insect Feed (Option 5: As a part of the Free 25% Customization – Profiles of 5 Additional Companies of your Choice)

Frequently Asked Question About This Report

Which application segment is predicted to dominate the market over the forecast period in Insect Feed Market?

The poultry segment is predicted to dominate the market over the forecast period. The poultry sector is expanding at a significant rate, particularly in emerging countries. Crickets, cockroaches, stink bugs, scale insects, flies, and ants, act as a complementary food source in the industry.

Which are the multiple source segment in Insect Feed Market?

The multiple source segment include meal Worms, Fly Larvae and Others.

Who are the notable players operating in the Insect Feed Market?

What is the predicted market size of Insect Feed Market by 2027?