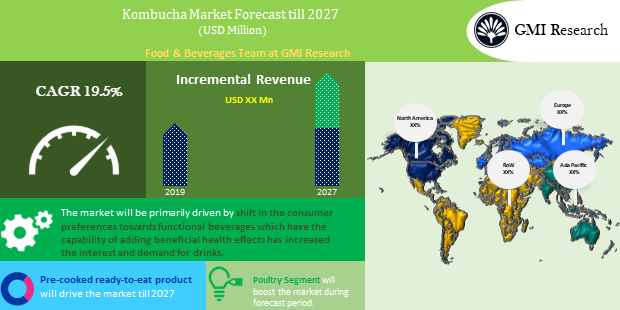 Introduction of the Kombucha Market Report

Kombucha is a lightly effervescent, fermented, and sweetened black or green tea, which is commonly consumed for several health benefits. It is made by brewing strong sweet tea and then symbiotic colony of bacteria and yeast is added during the fermentation. The final product is full of pro-biotics, that promotes good health offerings like improved digestive system, immune system etc. The rising awareness related to the benefits of this drink is another drive that is contributing for the growth of global kombucha market.

To have an edge over the competition by knowing the market dynamics and current trends of “Kombucha Market”, request for Sample Report here

The shift in the consumer preferences towards functional beverages which have the capability of adding beneficial health effects has increased the interest and demand for drinks such as kombucha. For example, according to IFT (Institute of Food Technologists), functional beverages held 76.4% of the share in 2017, from the overall beverage sector in the U.S. The probiotic drinks are made from fermented milk such as kefir and yogurt.  Since kombucha is a probiotic drink, the awareness related to the importance of probiotic in gut health has raised the demand for kombucha across the globe. Furthermore, availability of several flavours in the market is another significant factor that has surged the growth of the kombucha market. With the notable change in the consumption behavior, the consumers have become bold and does not refrain from experimenting with the new innovative flavours. For example, in 2020, Kombrewcha launched new flavours mango pineapple and blood orange, which has attracted consumers and is increasing the growth of kombucha market size.

Restraint in the Kombucha Market

As per the kombucha market analysis, high taxes on sugar products coupled with stringent regulations made by the manufacturing process’s regulatory bodies are the two factors that are expected to hamper the global kombucha market growth during the forecast period.

Based on the type, flavored segment is expected to hold a major pie of the global kombucha market based on the type. The rise in flavors and extracts in functional beverages is a major factor that has driven the demand for flavored kombucha across the nations. Flavored kombucha is used in number of food and beverage products due to its ability to offer various health benefits like strengthening the immune system, reducing blood pressure, etc. It is increasingly preferred in breakfast meals, candies, ice-cream toppings, etc.

Based on the distribution channel, supermarket/hypermarkets segment is expected to grow at a higher CAGR in the global kombucha market based on the distribution channel. This growth can be attributed to the huge discounts offered by the supermarkets and hypermarkets during the season and even in the off-season. In addition, Kroger, which is a supermarket based in U.S., has shown an increase in annual sales from 2018-2019, from US$ 121,852 to US$ 122,286, which projects the growth in millions, thus contributing for the growth of the segment and surging the demand of the global kombucha market.

Based on the region, the North America region is expected to capture a notable market share in the global kombucha market over the forecast period. Due to strong players in the region, like Hain Celestial, KeVita, Asheville Kombucha Mamas, the demand for kombucha has increased, which has driven the overall kombucha market. Changing consumer behavior is another major factor that is responsible for the growth of the region. Growing healthcare concern in the regions and availability of the health drinks like kombucha in the region is significantly driving the region’s growth. According to Glanbia Nutritional’s Inc., the U.S. functional beverage market size was USD 39 million in 2018, which shows the region’s tremendous potential. The regional growth is primarily attributed to the increased demand and supply of non-carbonated and low-calorie beverages, such as flavored kombucha.

Major Players Operating in the Kombucha (Option 5: As a part of the Free 25% Customization – Profiles of 5 Additional Companies of your Choice)

Frequently Asked Question About This Report

What is the growth rate of Kombucha Market during forecast period?

Kombucha Market is witnessed to grow at 19.5% CAGR during the forecast period.

Which is the largest Distribution channel segment is expected to grow at higher CAGR during forecast year?

Supermarket/hypermarkets segment is expected to grow at a higher CAGR in the kombucha market. This growth can be attributed to the huge discounts offered by the supermarkets and hypermarkets during the season and even in the off-season.

Who are the prominent players in the Kombucha Market?

what are the major factors driving the Kombucha Market?

The major factor driving the Kombucha Market include the shift in the consumer preferences towards functional beverages which have the capability of adding beneficial health effects has increased the interest and demand for drinks such as kombucha.

Browse By Categories
Manage Cookie Consent
To provide the best experiences, we use technologies like cookies to store and/or access device information. Consenting to these technologies will allow us to process data such as browsing behavior or unique IDs on this site. Not consenting or withdrawing consent, may adversely affect certain features and functions.
Manage options Manage services Manage vendors Read more about these purposes
View preferences
{title} {title} {title}
View Cart Checkout Continue Shopping